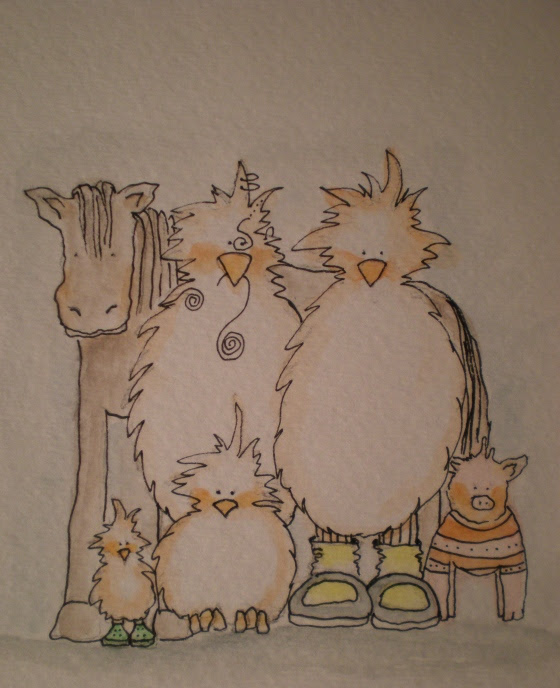 Flower is giving several of the new guests a tour of The Coop.  Henry, who has taken to wearing sweaters, is by her side.  Sofie, just finished with her Occupational Therapy session and was happy to be going for a walk.   She is wearing some of the jewelry she has been designing during the evening.  Robert, the miniature pony  Rene rescued last week, is  finally strong enough to join them.  Julia, rescued from their very first night out, is healthy and back on her feet, sort of.  She sits a lot but she’s walking more.  And baby chicklet Joy was released from the nursery early this morning.  Flower is keeping an eye on her because she is rather tiny and she doesn’t want her to wander off and get lost.  After the tour Flower is taking everyone to the kitchen for some of the hens’ delicious corn bread.  Ice cream will follow and then everyone will go back to their guest cottages (and the nursery) to rest.  It takes a long time to heal from the inhumane treatment their guests received at the hands of heartless humans.

More guests are arriving all the time.  Friends have come to The Coop to help in the rescue effort.  The bunnies arrived a few days ago and their main contribution is keeping the wounded company and warming those who need warmth.  The piggies do whatever they can, the goats formed a transport group and pull the wounded in wagons and take them where they need to go.  The horses go on raids and pull large wagons filled with those in need.  The Rescue Effort is amazingly effective.  The cruel and hateful humans never think that animals and birds are intelligent enough to be a threat.  The crows set up sentries wherever the raiding parties go and send out a call if humans are out and about.  Several time they have attacked humans and kept them busy so that the rescue teams could escape.  Things are coming together nicely and Flower and Rene are usually in the front lines.  They are fast, clever and dedicated.  They never leave anyone behind.  They are a perfect team.  And they love each other.