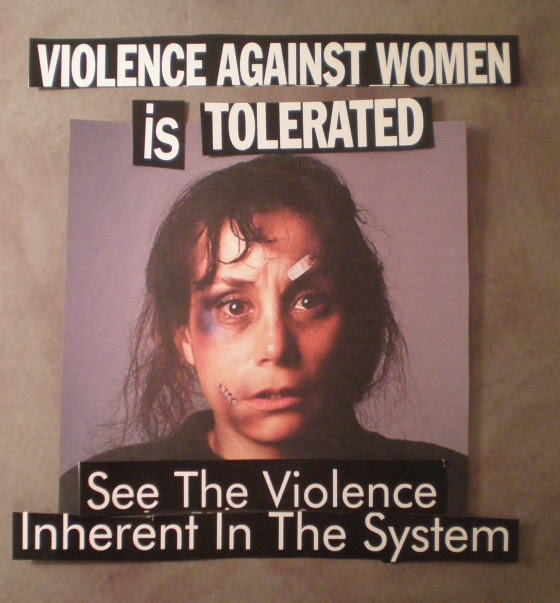 *  According to the U.S. Surgeon General, domestic violence is the leading cause of injury to women in the United States.

*  The U.S. Department of Justice estimates that 95% of the victims of domestic violence are women.

*  A WOMAN IS BEATEN EVERY 15 SECONDS IN THE UNITED STATES (Bureau of Justice Statistics, Report to the nation on Crime and Justice.  The Data.  Washing DC Offic of Justice Program, US Dept. of Justice, Oct 1983)

*  35% of all emergency room calls are a result of domestic violence.

*  Of those who abuse their partner, well over 65% also physically and/or sexually abuse the children.

*  Each day…3 children die as a result of abuse.

This is the tip of the iceberg.  There are pages of stats on this issue.  OUR CULTURE ALLOWS THIS TO HAPPEN.  OUR CULTURE CARES SO LITTLE FOR THE LIVES OF WOMEN AND CHILDREN THAT THE SYSTEM IS SET UP TO ACCOMMODATE THE MEN WHO DO  IT.  Women and children are beaten, raped, tortured and killed EVERY SINGLE DAY, and what is being done about it?

Many women are taught that they DESERVE to be abused.  That they ASKED FOR IT.  That they are worthless and are “LUCKY to have HIM.”  WOMEN AND CHILDREN ARE DYING, EVERYDAY, AT THE HANDS OF MEN.  ALL WOMEN ARE IN DANGER ALL THE TIME!  Women are kept poor and dependent and that feeds into the entire problem.  This is done ON PURPOSE.

Violence is happening on college campuses, on the street, the running path, in bathrooms, parking lots and anywhere a woman may be.  VIOLENCE IS A WAY OF LIFE FOR WOMEN.  WOMEN LIVE IN A WAR ZONE AND THE “ENEMY” IS EVERYWHERE.  THE PEOPLE THEY LIVE WITH, WORK WITH, ARE RELATED TO, NEIGHBORS, EVERY MALE THEY SEE.  Women are FORCED to live in constant fear.  They are never safe.  Big, strong men BEAT HELPLESS WOMEN AND CHILDREN…women and children who can’t fight back.

THIS IS OUR CULTURE.  What are we going to do about it? How many more women and children have to die before action is taken AGAINST THE MEN WHO BEAT AND KILL THEM?  What kind of life do you think the woman in the above photograph has?  A man did this to her and once it’s been done, stats show that it will happen more often and be more destructive.  Nice life…welcome to the world of millions and millions of women.

2 thoughts on “This is what our culture thinks of women…our culture ALLOWS this to happen…it’s built into the system.”