sometimes
I
feel
trapped
as
if
there’s
no
way
out

all
I
see
are
walls
barriers
that
hold
me
in
place

picture by the talented Paul Militaru

and wonderful poem by Gigi 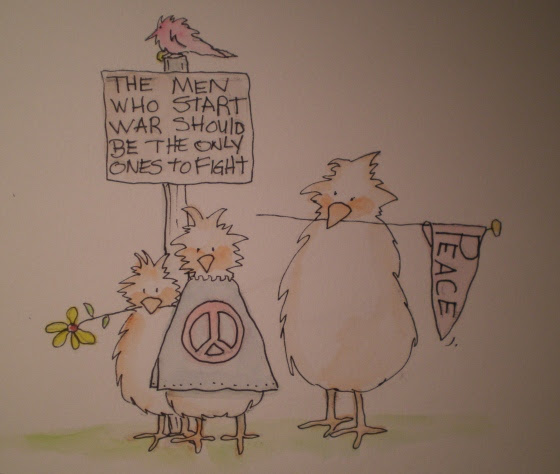 Bean has researched Flower Chicklets from the 60’s and is fashioning herself after them. Pinkie believes that wars should be fought only by those who start them and never include innocent bystanders, or anyone else at all.  Andrew went on his first raid two days ago where he broke down the door of the Factory Farm and brought all of the hens and their chicklets to freedom.  Everyone is very proud of him.   The chicklets stand for love, honor, acceptance, beauty, creativity, freedom and peace.  They live those things every moment of their lives.  They asked me to tell you that Red, the bird, was also for peace and all good things.  So is her flock.

and poignant poem by Gigi

If a butterfly can alter the world with its wings,
what, then, can humans, imagining..?

There are no walls in the forest

Where eagles rise with the tailwinds

Roots of the gnarled oak

Venture out in every direction

Baring their bones to the sun

Arms reach out without thought

Embracing those that walk peaceful paths

Embracing those that do not

freedom from ALL forms of violence

freedom from the beliefs of others

freedom from those who want power over us

freedom to live in a NON policed state

freedom from the religious beliefs of others

freedom from hunger, poverty and lack of education

freedom from the political opinions thrust upon us by others

the freedom to say NO to war

the freedom to have lessons in school INCLUDE all people

freedom to SHUT DOWN BIG BUSINESSES and THOSE WHO DESTROY/POISON OUR environment and us
(includes: logging, oil rigging, cutting down the rain forest, mining, fracking…causing earthquakes,
habitat destruction and GMOs etc.)

the freedom to have clean air and water

the freedom to live in a world where there is FREEDOM for all beings…freedom from torture, cages
and experimentation… because animals are not clothing, food, entertainment or our slaves. Freedom from being hunted.
Animals are individual beings here for their own benefit and purpose not for our self-centered, ego-maniacal USE.

Freedom to live in a society that is not run by lying, rich males who have their own agenda–an agenda that does not include the rest of the population who they refer to as, “the herd.”

After we have all of these things we can talk about rainbows because DUE to the things above, a lot of people/beings have never heard laughter or seen a rainbow.

There is inner peace, of course, but if all living things are not ALLOWED to live in peace, free from violence and fear, what good is taking care of ourselves as individuals? How does that work? Holding our centers when all around us suffer? I don’t get that. Being calm and sitting quietly while our fracking makes the earth tremble and crack, so that people can become rich and leave an environmental nightmare for those who come after us? I don’t get that either.

We have never actually had peace, so it’s difficult, if not impossible, to know what it would look like, or how it would feel. But I believe that without the above, we will NEVER have the chance to find out. As I’m typing this, we are currently signing petitions to stop our own government from passing a law that would allow them to SPY on us, innocent people, for years to come (apparently we need a way to stop them because they have been doing this for a long time and just FORGOT to tell us, or ask if we MINDED, until someone kindly ratted them out). We are being treated like criminals, being spied upon without just cause by a corrupt government that acts as if everything they do is for OUR benefit and not their own. Freedom? We have just as much freedom as those in charge allow us to have. They can take our freedom/rights away anytime they like, they just need to write a few laws, get the armed forces and police to hunt us down and that’s pretty much it. 1984. Even if we stop this one law from passing they will keep at it until they get what they want, unless they ignore law and do what they always do…spy on us anyway. We have no idea what our government is doing…NOT EVER. The scary part is, that as the older generations pass away, no one will be left to tell others that things don’t have to be the way they are. That there was a time when the government worked for the people and freedom was a REAL thing. The damning evidence will be erased from our history books and the generations that follow will think that living in a policed state and ratting out your family and friends are normal. They will think that being stopped and searched is the way life has always been. The truth, like all the truth behind us, will be buried by the rulers and history will say whatever they want it to say…just like it does now.