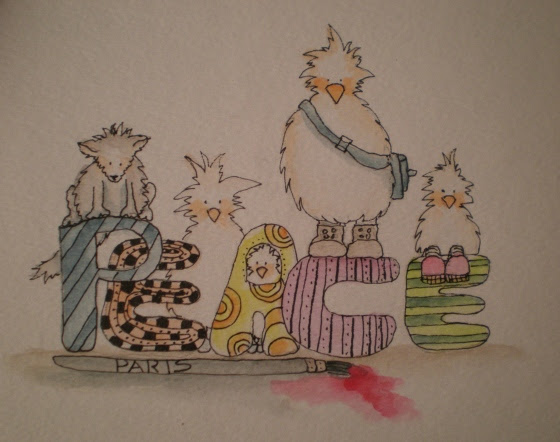 The chicklets are very upset by what happened in Paris.  They wanted the humans to know that they hope artists will not stop creating.  I explained that things like this just make people stronger….more cartoons and artwork will continue to come from all over the world.  They were happy to hear that, and while they cannot understand humans, and the way they kill everything, they are happy to know that artists will not be silenced.

The deeds in Paris generate numbness of brain and render our senses impaired. I have difficulty with words.

I ponder the motives that cause young people to channel their ennui into death as an end-game. Seemingly senseless destruction – murder plain, but never simple, and rarely single.

What compels them? What drives them?

Whose skilful indoctrination induces capitulation into falsely melded causes? What events – ‘see? see here… and there’ – make the mess of ideals stand tall and seeming real?

How can we – simple folks – get within that inky blackness, that smelly mire, to set straight the conflation?

Perhaps firstly we should list our own hypocrisies, end our own violence, and set straight our own confusion?

(Faced with atrocity, Tweets, texts, and Wordles, amplify – for me anyway – the difficulties of using a limited word-pallette to create a sense of meaning.)